My Interview with My Father: Ray Hintze
Episode 5: A Whole New Life 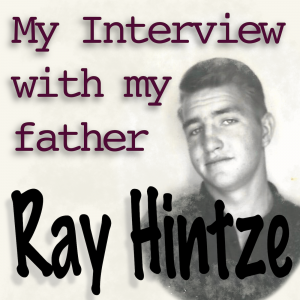 In this episode, we pick up right where we left off in our last episode.  Ray and Dawna move out of the tri-level home in North Salt Lake, and into a duplex in Bountiful, and eventually to the home in Farmington. The home where dad would live for the next two decades.

Dawna gave dad an ultimatum to move, or she’d leave (a threat she had made before).  Dad called her bluff, and she filed for a divorce, and to her chagrin, dad didn’t fight the divorce and the marriage ended and eventually opened the way for him to marry Gloria Williams, with whom for the last decade he had been having a secret relationship.

Dad will talk about his various jobs, including as a police officer where he, by sheer luck, arrested the Salt Lake City drug kingpin, Eli “killer” Jenkins, during a routine traffic stop.  Dad kept the convict’s revolver (a snub-nosed 0.38 that was loaded when they found it in his car) in his closet for years, as evidence, in the event the case ever went to trial, which it apparently never did.

We’ll talk about some of Dad’s buddies, and the things he liked to do, including hunting, where dad was famously a good shot, and would shoot deer for others.

We’ll talk about Ray’s relationship with his parents in their later years in life, and the special bond he had with his older sister, Jane. And, much, much more.  Thanks for joining us.